Every living thing has its own natural responses to stress.

When critical nutrients are in short supply, our bodies, for example, find ways to maintain normal function until those nutrients are replenished. Plants do the same. In drought conditions, natural processes kick in to keep them alive until they can be watered again.

When faced with a water shortage, plants produce a stress hormone known as abscisic acid (ABA), which signals the plant to consume less water. ABA binds to a specific protein receptor in the plant, signaling stomata—or unique guard cells—to close and reduce the amount of water lost. This receptor is so important that its discovery by UC Riverside’s Sean Cutler, his team and others was listed as one of 2009′s breakthroughs of the year by Science magazine.

To help plants survive extreme drought conditions, some have tried spraying ABA directly on crops during water shortages. The move can improve crop yields, but ABA is expensive to produce and breaks down easily, even before a plant can absorb and use it. It began with dying weasels. First one, then many, all mysteriously killed by rat poison banned in the lush Northern California forests where the animals live. Damning evidence soon pointed to a surprising culprit: illegal marijuana farms, where growers use poisons to protect an increasingly lucrative crop.

But the damage caused by pot farms is greater than just one species of poisoned animal—it is far reaching, harming forests, streams, and broad wildlife populations. As states like California debate the legality of marijuana, new research suggests the discussion should focus not only on citizens’ right to smoke, but the broader impact of producing the drug.

There is a surprisingly strong environmental case to be made in favor of legalizing pot, because illegal marijuana is so bad for California’s wilderness and wildlife.

“It’s not just a moral and ethical debate,” says Mourad W. Gabriel, a scientist at the University of California, Davis, who helped unravel the mystery of the dying weasels. “It’s a major environmental concern.” 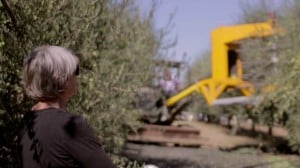 Chances are the olives in your kitchen come from California. Watch how researchers are finding new ways to harvest this tasty crop.

“The United States is the world’s largest table olive and olive oil market. Traditionally olives have been harvested by pickers wearing gloves and they stripped down the branch into a twenty-pound bucket they wear around their waist.  Unfortunately the cost is becoming prohibitive and labor availability is decreasing sharply.  What we’re really hoping is the mechanical harvesting will be cheaper, be more reliable than trying to find an uneven labor force and it will allow us to sustain an industry that has a nice long history in California.”  – Louise Ferguson, UC Davis Extension Specialist