The Thirty Meter Telescope (TMT) —which has been spearheaded by UC and the California Institute of Technology since 2003— will be built and run by a consortium of universities and scientific organizations from around the world.

Special adaptive optics will correct for the blurring of Earth’s atmosphere, enabling the TMT to study the universe as clearly as if the telescope were in space (In fact, it has 12 times the resolution of the Hubble Space Telescope).

Once finished, the new telescope will allow astronomers to see faint objects clearer than ever before:

It will be able to focus on and identify extremely distant structures that currently appear as blurry smudges in the Hubble Deep Field. As yet, no one knows what these objects are.

This new resolution will provide insights into the both dark matter and dark energy. And it will widen the search for planets orbiting stars outside our solar system. For the first time, we will be able to routinely image direct light from these exoplanets, garnering information on their atmospheric chemistry and dynamics.

The new TMT will also be able to see further back in time than any previous telescope, all the way back to the formation of the first stars and galaxies that followed the universe’s “Dark Ages.”

Read more about the project at universityofcalifornia.edu → 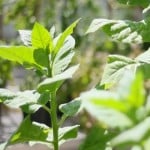 Scientists at UC Berkeley and Lawrence Berkeley National Laboratory’s FOLIUM Project, funded by ARPA-E, use light to convert the carbon in tobacco leaves into biofuels.

“Once we have a plant and a production yield that promises commercial levels within the near future, I think we will be able to attract the interest of the big tobacco companies. Growing tobacco for cigarette consumption is a dwindling industry and we believe that converting tobacco into a bioenergy crop will also generate a new market for tobacco farmers.”
— Christer Jansson