Materials scientist Suveen Mathaudhu shows us how both our favorite superheroes and real-world scientists create materials to save the world every day.

Some of Mathaudhu’s own research at UC Riverside has been inspired by Captain America’s shield: is it possible to make a material that is both incredibly strong and super lightweight?

Advances in this area have already made a real impact, particularly in transportation. Lighter vehicles mean better fuel efficiency, making cars cheaper to run and better for the environment.

The Ford F-150, the top-selling pickup truck in the US, shifted from a steel frame to an aluminum frame, increasing the fuel economy of the vehicle by taking over seven hundred pounds out of the frame of the vehicle.

Making the frame weigh less is a big start, but there’s another less obvious source of weight: wiring. The average automobile has between 45 – 110 pounds (20 -50 kg) of electrical cabling.

“Most of it is thick copper cable, and copper cable is heavy – and now copper is very expensive,” said Mathaudhu. “If we could get a fraction of that conductivity in aluminum, it would not only be cheaper to implement, it would be lighter weight even though it will never have the conductivity that copper will inherently have.”

Mathaudhu’s research has shown how you can use nanostructured features in aluminum to maintain its conductivity, while simultaneously boosting the strength of the aluminum. Aluminum is both cheaper and lighter, so by moving toward aluminum cabling, car manufacturers can solve two problems at once.

Nobody blows things up like Hollywood. Frequently, those jaw-dropping pyrotechnics are digitally created in post-production.

Now, with the help of a tool called Wavelet Turbulence, filmmakers can generate realistic swirling smoke and fiery explosions that are more detailed, easier to control and faster to create.

UCSB researcher Theodore Kim (along with three collaborators) developed the software, which won an Academy Award in 2012. So far, Wavelet Turbulence has been used in a number of major Hollywood films including Avatar, Iron Man 3, Man of Steel, and Super 8. In 1926, the U.S. National Forest Service began a natural vegetation survey of California.  The initial purpose was to provide data in support of statewide land use and fire protection policy development.  Part of this was photo documentation of the different regions of California. 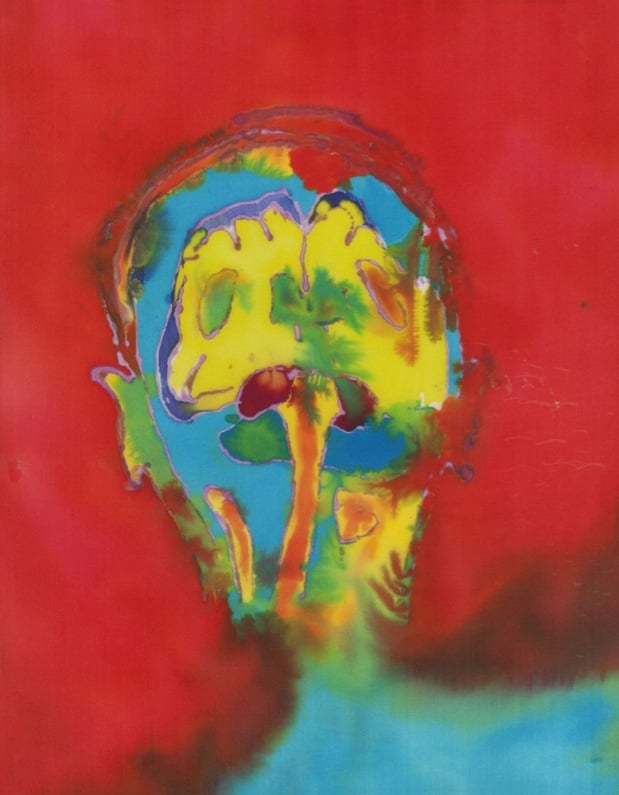 “Self Portrait of the Artist’s Brain” – Painting on Silk

After being diagnosed with Multiple Sclerosis (MS), Elizabeth Jameson began creating paintings based off of MRIs and other digital scans of her brain:

“My diagnosis initiated a fascination with these eerie images, which I found frightening, yet mesmerizing. I felt a strong urge to reinterpret my brain scans—to use them in my art to explore the wonder and beauty of all brains, including those with disease.”

As a post-doc in health policy at UCSF, she researched healthcare policy — focusing on families who had been denied healthcare for children with chronic illnesses or disabilities. Inside Science recently wrote about the study by UCSD’s Neil Cohn, Navigating Comics, which looks at the underlying structure of the comics language:

People who read the English written word scan text from left to right. Once our eyes hit the end of the page, we stop. Then ding!, like an old-time typewriter, our eyes shift downward and snap back to the left to start reading the next line. This is known as a “Z-path,” as our eyes whip about like the end of Zorro’s sword.

But that linear track gets derailed in comics with complex layouts and Cohn wanted to know if experienced readers had strategies to follow along.

Cohn rustled up 145 participants at the 2004 Comic-Con International, a comic book convention held in San Diego. Participants had varying experience with reading comics, ranging from “never” to “often.”

Each participant was given a booklet containing 12 pages of blank panels. Each page was independent of the rest and used different design techniques.

More news on our tumblr page → To get the bees to land on Fischer, photographer Richard Avedon enlisted the help of UC Davis entomologist (and professional bee wrangler) Dr. Norman Gary, who smeared the beekeeper with queen bee pheromone and a dash of plant extract similar to peppermint — a method he devised himself.

Norman Gary, a professor emeritus, also has quite the impressive imdb page — with bee wrangling credits ranging from My Girl to The X-Files.

Hollywood likes a good explosion.  Now, with the help of an open source algorithm called Wavelet Turbulence, filmmakers can digitally create pyrotechnics that were formerly time-consuming and difficult to control.

UCSB’s Theodore Kim (along with three collaborators) picked up the Academy Award in Technical Achievement for Wavelet Turbulence.

So far, it has been used in over 26 major hollywood productions including Avatar, Sherlock Holmes, Hugo, and Super 8 (pictured above).