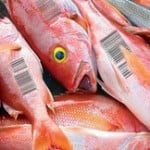 A recent survey done by Oceana says that fish found at the market are not always correctly labeled.  So, scientists are working on a genetic sequence technique called fish barcoding that can positively identify fish species.

Marine biologist Ron Burton of UCSD’s Scripps Institution of Oceanography says it’s important for the public to make sure they’re getting what they think they’re getting:

“In a market like red snapper, we can be seeing red snapper at many fish markets and that would lead somebody to believe that the fish is very common, when in fact what’s being sold is a diversity of species – some of which are common, some of which aren’t. And so it can lead to a false impression about the abundance of species to the public.”